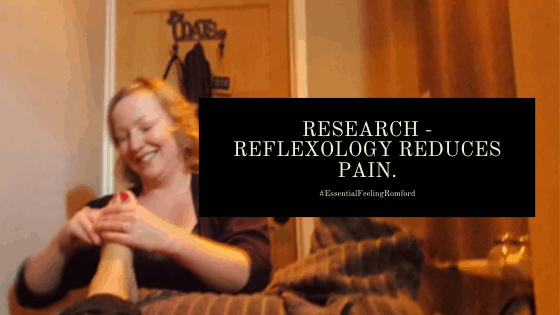 More than one study shows reflexology for pain is helpful

When reviewing the pain in cancer arena, there have been several studies that suggest that there is a place for reflexology in the care pathway. A study by Stephenson in the USA[1] in the difficult to treat group of metastatic cancer showed an ‘immediate positive effect of reflexology for patients with metastatic cancer who report pain’.

A second study from America[2] on post-operative pain and anxiety amongst patients with digestive cancer showed that together with standard postoperative analgesia, compared to a control of usual pain management, the reflexology group showed statistically less pain, anxiety and requirement for analgesia than the control group.

When we look at pain outside of the cancer field, a recent exploratory study of reflexology with pain threshold and tolerance[3] compared a sham TENS machine treatment as the control to reflexology in an ice bath pain experiment. The results showed that the reflexology treatments significantly increased pain tolerance at 60 minutes, 90 minutes, and 120 minutes. There was a reduction in heart rate over the first 60 minutes too, indicating that the results may be due to an anti-nociceptive effect. ‘These results suggest the possibility that reflexology may be useful on its own or as an adjunct to medication in the treatment of pain conditions in man’.

One of the issues regarding pain is that it can result in the long term use of medication, of both over the counter painkillers (OTC) and prescription only medication (POM).  Non-steroidal anti-inflammatories have potential to cause stomach ulcers, kidney disorders and even liver failure and act additively when used concomitantly with other common drugs[4]. Even multiple doses of Paracetamol and/ or the prophylactic medicines can produce drug induced refractory headaches[5]. Reflexology for pain can improve this.

Another study for menstrual pain

In a small study of students with dysmenorrhea a comparison was made to Ibuprofen. The Ibuprofen was prescribed 400mg every 8 hours over 3 days for three cycles. The reflexology group received 10 treatments over the first 2 cycles, but no treatment during the third cycle. Reflexology was associated with a greater reduction of menstrual pain duration and intensity across all three cycles as compared to the Ibuprofen treated group[6].

Published studies of reflexology indicate that it aids with Migraines. Lafuenta et al compared reflexology to Flunarizine, a drug often used in the treatment of headache. 32 patients with a variety of headaches including Migraines were randomised into two groups, one received reflexology and a placebo tablet, while the other received Flunarizine and an unspecific friction massage of the arms to control for human contact. The frequency and pain intensity was measured and the results show that the reflexology was at least as effective as the Flunarizine which could be particularly useful where pharmacological intervention is contraindicated[7].

In a study comparing reflexology to segmental massage in females with Migraine Wojciech et al looked at the frequency, intensity and duration of Migraine attacks. All variables were reduced at the end of the intervention with both therapies. At three months post intervention, the variables were both still improved with both therapies, however, if the Friedman test is applied the results were much more favourable to the reflexology group[8].

Finally, a study was carried out on Migraines induced by nitroglycerin which is used in the treatment of acute and chronic angina and congestive heart failure.  Reflexology was applied to the big toes, which under reflexology theory is representative of the head; compared to application of pressure to another irrelevant part of the heel or no treatment at all as a control.

This study was on all males which is unusual for Migraine research but which is reflected the original presenting condition of angina and congestive heart failure. The results showed a highly statistical difference for the reflexology group (p=0.000) using the numeric rating scale for pain as compared to the other two groups.[9]

[8] Effects of feet reflexology versus segmental massage in reducing pain and its intensity, frequency and duration of the attacks in females with migraine: a pilot study. Wojciech K, Pawel L, Halina RZ.J Tradit Chin Med. 2017 Apr;37(2):214-9.